Under the guidance of Artistic Director Tina Boyer Brown, ChiArts’ Conservatory Heads and Arts Faculty provide over 2,500 hours of tuition-free, pre-professional arts training to every scholar-artist from freshman year to graduation. Learn more about our Arts Conservatory Heads and the visionary leadership they bring to ChiArts!
ChiArtsArtsDepartmentHeads_2022-2023

Parent teacher conferences will take place on Thursday, October 27, 2022 from 12:00 PM to 7:00 PM (there will be a break between 3:30-4:00 PM). We will be offering virtual appointments for parents/guardians, but all parents/guardians are welcome to attend in person. Every parent/guardian must make an appointment with a teacher they would like to meet with. ChiArts recommends to prioritize two or three teachers.

To set up an appointment with each staff member, click our newsletter featured here.

We look forward to meeting with all our amazing families!

On October 13-19, ChiArts hosted its third annual Connections Week. The five-day event connected scholar-artists to post-secondary opportunities with support from a range of well-loved local colleges, to nationally acclaimed universities, to conservatory training programs. Highlights include: a masterclass with the Music Director of Hamilton on Broadway, audition workshops with local universities such as Northwestern and DePaul, one-on-one portfolio reviews, professional development panels from working artists, and evening performances throughout the week.
Dance Conservatory senior Raina Wiley took on the week with an inspiring opportunistic spirit! Raina auditioned for ChiArts as a novice with no formal training, but a great passion for dance. Four years later, Raina is now performing for top training programs at Connections Week and pursuing a career in dance. Inspired by Raina’s tenacity, FOX Chicago interviewed Raina about her journey as a scholar-artist. On the live broadcast, Raina shared “My dance experience transformed (while at ChiArts), but I also transformed into an artist and a dancer!”
Watch senior Raina Wiley’s live TV interview. 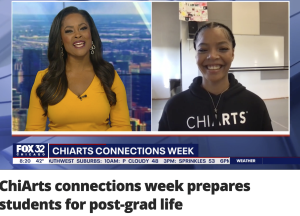 We’re excited to welcome all scholar-artists and staff back to Augusta Boulevard. Below is our school-wide calendar for the upcoming year. Our production calendar will be released this fall, stay tuned!

Visual Arts juniors Ari Antos, Monee Bridge, DeAndrea Carr, and Sadie Soria were selected to attend the annual week-long summer residency at the Anderson Ranch Art Center in Snowmass, Colorado. These scholar-artists experienced 40 hours of intensive studio training while in the beautiful Colorado Rockies from June 23 through June 29. In addition to Anderson Ranch Arts Center, juniors Aidan Bell, Cecilia Budzyn, Victor Garcia, and Jenna Lozano were selected to attend an one-week residency at The School of the Art Institute’s Ox-Bow in Saugatuck, Michigan from June 30 through July 6. They took an advance drawing class with Claire Arctander, Chicago artist and Campus Director of Ox-Bow!