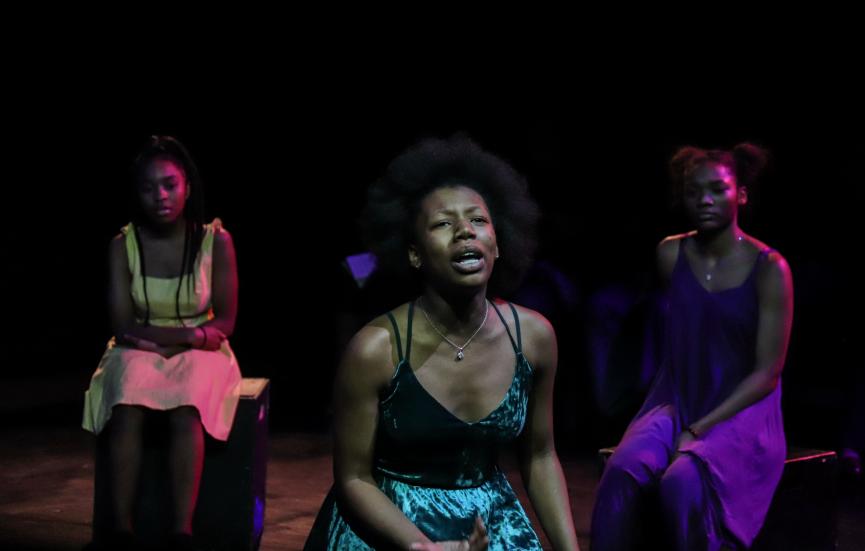 The Theatre Acting Program is designed to train actors in a wide range of skills, techniques and experiences to provide a broad overview of theatrical performance, practice, history and literature. The overall arc of the program is to begin by establishing a foundation in the first year, moving into progressively more challenging work in years two and three, and finally exploring each student’s unique artistic voice in the final year. The end goal is to provide a high level of instruction and experiences that prepare students for further study at the college level or entrance into the profession.

Acting I (2 semesters) Students explore making strong choices and taking risks as individual performers and as an ensemble, using improvisation as a foundation in the first semester and story theatre in the second. The basics of character development, scenic construction, and dramatic agreement are explored using body, voice, and imagination to create fully realized and committed characters. Using techniques drawn from multiple theatrical backgrounds and pioneers, students heighten their connection to sensory life, environment and relationship in order to strengthen their creativity, imagination and understanding of human behavior. They develop skills related to scenic objectives, listening, impulse, problem solving, physical and verbal communication and given circumstances. They take the skills developed through improvisation in the first half of the year and apply them to text work in the second semester. Performance Requirements: Freshman Preview (Fall) and Acting Curtain Call (Spring).

Dance I (2 semesters, joining with 1st year Musical Theatre students) An introduction to dance technique as it applies to Musical Theatre performance with a focus on proper body alignment, placement and conditioning, Musical Theatre dance vocabulary, and moving as part of an ensemble. Performance Requirements: Freshman Preview (Fall) and Musical Theatre Curtain Call (Spring). Styles of dance taught are jazz and ballet.

Ensemble Sing (2 semesters) This course is designed to provide another way (in addition to Voice and Speech) for students to use breath and voice to develop a powerful instrument in a communal way with their ensemble. It will also cover the fundamentals of singing and choral singing that are necessary in the professional world of acting, where more non-musical theatre is including song in performance. It will also prepare students to audition for the musical if they so choose during their sophomore, junior or senior year at ChiArts.

Voice and Speech I (2 semesters) An introduction to voice production, including how sound is produced, how it is connected to image and intention, and how it is affective for an audience. Students learn to identify their habits, as well as larger cultural vocal holds that affect the voice, and begin the process of release through physical exploration and warm ups. Using a variety of texts students explore the muscularity and size of speech and sound, and begin to learn to use their vocal mechanism to radiate energy up and out, in order to fill any space they are performing in through the concepts of placement, pitch, tone, pace, and range.

Theatre Studio* Theatre Studio is designed to be a class where theatrical learning converges for first year theatre students. The focus of this course is threefold: to provide the foundations of theatre vocabulary linked with direct experience (beginning theatre history, technical theatre and stage terms), to learn the habits needed for the discipline of theatrical performance (listening, memorization, collaboration, organization, networking), and to learn how to read a script. The umbrella over these three focal points is growth of the ensemble. We will continue to include Spolin exercises (from “Improvisation for the Theatre”) and games to build respect, rapport, and unity among the group.

Acting II (2 semesters) Scene study and acting techniques from contemporary playwrights with an emphasis on realism. This course introduces students to the work of Constantin Stanisklavski and elements of dramatic text analysis including beats, objectives, tactics, obstacles, given circumstances and previous action to aid the student actor creating recognizable human behavior, action and theatrical worlds. They also work on dramaturgical research in order to fully understand the world of the play and the circumstances in which it was written and has been performed. In the fall semester, students focus on scenes from a contemporary play.. Performance Requirements: Winter Acting Showcase (Fall) and Acting Curtain Call (Spring).

Theatre History and Literature (2 semesters)* A continuation of the the script analysis skill work begun in Theatre Studio, this course covers theatre’s beginning in different cultures around the world with a focus on early Greek and Roman theatre, Shakespeare, and ending in United States with modern playwrights.

Movement II (2 semesters) An exploration of movement through ensemble, space and in groups. Students uncover the expressive potential of their body through specific techniques in Viewpoints, Laban and African Dance. Focus is given on listening with the entire body, movement to external stimuli and on impulse, making dynamic choices in developing the physical/emotional life of a character, and in generating original performance.

Voice and Speech II (2 semesters) Building on the foundations of Voice and Speech 1A, students continue to specify and deepen their own awareness of habits, and continue to work through physical warms ups to assist in the release of breath and connection to sound and intention. They begin to focus on character expression, based on text analysis, and begin to explore the journey toward vocal transformation. They explore their interior emotional landscape and the connection to image, breath, and release. Using a variety of texts, including poetry, Shakespeare and contemporary playwrights, they focus on rhythm, meter, rhetorical and poetic devices. Students strengthen their articulation and diction and continue to speak with energy that is forward moving through space.

Acting III (2 semesters) Scene study and monologue work of various theatrical periods with an emphasis on texts with heightened language and physicality including the works of William Shakespeare and other classical playwrights. Students are expected to apply the analytical work introduced in the second year with contemporary playwrights to that of classical works. Performance Requirements: Winter Acting Showcase (Fall) and Acting Curtain Call (Spring).

Voice and Speech III (2 semesters) The focus is on refining the actor’s use of their voice through deepening their experience of resonance along with clarifying vowel and consonant articulation. Basic elements of speech will be explored to help the actor bring vocal clarity, energy and point of view to any text. In conjunction with the acting and movement classes, the text used in this class will be from classical periods and playwrights.

Stage Combat (1 semester) One semester focusing on basic weaponry combat. In addition to the skill and technique building, the class prepares the choreographed violence portions of the classical dramatic text being performed through the Acting III class.

Playwriting and Styles Section A (required for Junior Actors)

This course is designed to prepare the two junior ensembles for their senior project class the  following year in which they create an original one act play or musical. Foundations in styles of theatre and playwriting techniques will be practiced and discussed some of which will include docudrama and comedy styles.

Senior Project (2 semesters)* The creation and presentation of two senior showcases. In the Fall, students will present an Audition Showcase featuring monologues to be used for college and professional auditions. Following that, students and instructor will devise an original one-act play as a final ensemble

Directing (1 semester) An introduction to the work of the director with an emphasis on text analysis and working with actors on scene study.

Choice of Acting IV or Production Acting IV will focus on advanced level scene study for those choosing to enter college or the profession post ChiArts, culminating and entry in city wide scene and monologue competitions. Production will focus on technical aspects of theatre and will support and work with the Acting IV students to design for the material they are working on.

* Credit bearing course required for graduation Students must achieve at least a D in every Conservatory course every semester or they are in jeopardy of repeating the ENTIRE YEAR’S Conservatory sequence in the following year. This may result in not graduating on time.

Advanced Spolin Improvisation
Viola Spolin is the mother of improvisation and founded her work here in Chicago. This class will go deeper into her exercises – well beyond the basics that were covered freshman year to help the performer who wants their scripted work to be more connected, nuanced, tied to the sensory world and the where. Whether Spolin work was a strong suite and even if it wasn’t, this class will take you ever closer to your unique vision in your work as actors, directors, and playwrights.

Shakespeare & August Wilson
Take a deep dive into texts of August Wilson and William Shakespeare, both of which require of actors immense intellectual curiosity, great physical athleticism, strong vocal production, and deep emotional availability. You will finish the semester with at least one monologue from each playwright that can be used for auditions and/or competitions. (sophomores, you must take this elective before graduating)

Diverse Playwrights
This class analyzes the works of playwrights in a US context, post-1970 through present day. We aim to explore the contributions of playwrights of color, queer playwrights, immigrants and women, and how those experiences intersect in dramatic texts. Students will  gain a deeper understanding on how an artist’s identity can impact the art they create.

African Dance
African Dance Class will offer and utilize  traditional African movements and rhythms to strengthen stamina cardio, balance and coordination. This class will also use African songs and chants to exercise and discipline students’ ability to control and build the skill of vigorous movement while using voice and balancing breath simultaneously.

Theatre Education (with workshops to Elementary schools)
Many who work in theatre go on to be teaching artists! In this class you’ll learn how to engage students for workshops and higher learner through enhancing their curriculum through Theatrical means. We will prepare for hands on workshops with actual kids so we can put all that we learn to use. Lets have some fun making learning exciting for kids.

FOR SENIORS AND JUNIORS ONLY. APPLIED PRODUCTION is an extension and continuation of STAGECRAFT and THEATRICAL DESIGN, to include principles and practical application of techniques for designing theatre, and other types of live performances. Topics include the principles, elements, and objectives of design, scenic design and space, lighting, clothing and costume design, video production, and sound. This class is designed to be a group of 5-8 students. You must have already done stage crew, helped as AD or SM on a show at ChiArts to apply (prerequisite).

(Open to all Sophomores & Senior Actors)

Movement To Music
Movement to Music is an intuitive, energetic exploration of your most primal impulses. Exhilarating and exhausting, this class will take your work to the next level. It is not dance, but improvisational movement to music.

Physical Comedy
Physical Comedy will encourage a sense of exploration, curiosity, and creativity as we develop the technical skills necessary to build comedic moments, craft surprising characters, and slay scenes.

Playwriting and Styles Section A (required for Junior Actors)
This course is designed to prepare the two junior ensembles for their senior project class the following year in which they create an original one act play or musical. Foundations in styles of theatre and playwriting techniques will be practiced and discussed some of which will include docudrama and comedy styles.

Playwriting and Styles Section B (required for Junior MTs)