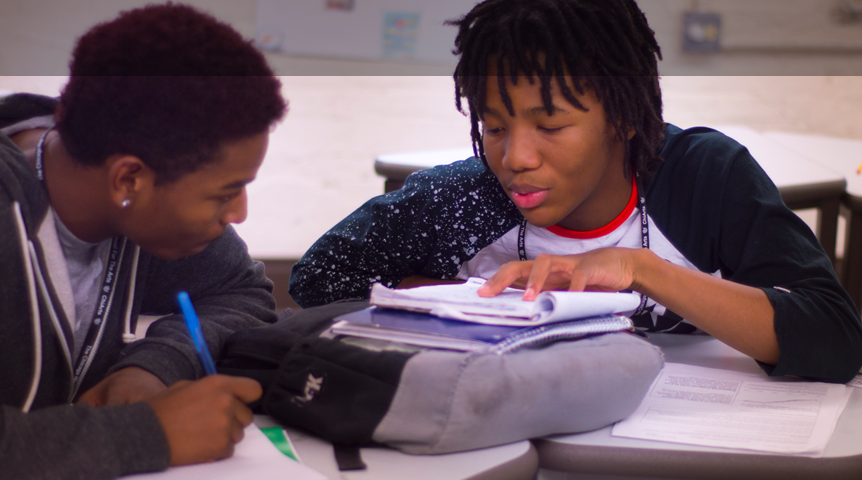 Tina Boyer Brown, Managing Director of the Arts Conservatories and Creative Writing Department Head was also a founding English teacher at The Chicago High School for the Arts. She is a lead teacher at the Summer Poetry Teachers’ Institute sponsored by the Poetry Foundation. Her work has appeared in RHINO, POETRY Magazine, The Journal of Education, and Jet Fuel Review. Working on behalf of ChiArts scholar-artists brings her great joy.

Sophie Goalson (a.k.a. Sophie Lucido Johnson) is a writer and illustrator whose work has been published in The New York Times, The New Yorker, The Guardian, Bon Appetit, Jezebel, Guernica, The Believer, and many other places. Her first book, “Many Love,” came out with Simon & Schuster in 2018. She is also a lecturer at the School of the Art Institute of Chicago. Her book has been nominated for and has won several awards, including a nomination for the nationally established Lambda Literary Award. Mrs. Goalson has over a decade of teaching experience, and she specializes in working with students with exceptional needs, trauma-informed practices, behavioral intervention, and intentional anti-racism. For a complete CV and samples of Mrs. Goalson’s work, please visit sophielucidojohnson.com.

Bessana Kendig graduated from Columbia College Chicago with a BA in creative writing. Bessana writes non fiction, magical realism, and short stories. They’re originally from Denver, Colorado and also work at the non-profit, Care for Friends which provides meals and necessary supplies for individuals experiencing homelessness. In addition to teaching at ChiArts, Bessana is a teaching artist at Ravenswood Elementary, specializing in visual arts and creative writing. Bessana spends their free time frequenting bookshops and coffee shops, reading tarot cards, and binge drinking chai tea. Since they began interning at ChiArts in college, they connected with the diverse and embracing community. Bessana says ChiArts “feels like home and I find myself not wanting to leave.”

Susanna Lang is a long-time educator in the Chicago area, having taught 5th grade through graduate school at various Chicago Public Schools, Northeastern Illinois University, and other institutions, and led poetry workshops at public libraries in the city and suburbs. Her third collection of poems, Travel Notes from the River Styx, was released in 2017 from Terrapin Books, and a chapbook, Self-Portraits, is forthcoming from Blue Lyra Press in June 2020. A two-time Hambidge fellow, her poems have appeared in such publications as Little Star, Prairie Schooner, december, American Life in Poetry and Verse Daily. Her translations of poetry by Yves Bonnefoy include Words in Stone and The Origin of Language. More information available at www.susannalang.com.

Chris Lin is an interdisciplinary artist based in Chicago, working in media including films, books, puppetry, music, and installation. Born and raised in Taipei, Taiwan, he moved to British Columbia, Canada and received his BFA with honor from University of Victoria in 2005. After relocating to Chicago, Mr. Lin pursued an MFA in Fiber and Material Studies from The School of the Art Institute of Chicago and graduated in 2008. His exhibition history includes Contemporary Art Workshop, Eel Space, and OP Shop in Chicago, Verge Art Fair in New York, Deluge Contemporary Art and 50/50 Arts Collective in Victoria, BC, and Atlantic Centre for the Arts in New Smyrna Beach, FL. His visual art and short stories has been published in Fiction At Work and Balliwik. Mr. Lin is the co-founder and collaborative director at Good Stuff House, a performance and publishing art collaborative, and the founding member and ukulele player of the folk-thrash-hop duo Hannis Pannis.
abalonemoney.com

David Mathews is a lifelong Chicagoan and earned is MA in Writing & Publishing at DePaul University. His work has been nominated for Best of the Net and a Pushcart. His recent publications include After Hours, Midwestern Gothic, Eclectica Magazine, Freeze Ray Poetry, Belt Magazine’s Rust Belt Chicago: An Anthology, and in Endlessly Rocking, an anthology of poems in honor of the 200th birthday of Walt Whitman. www.davidmathewspoetry.com

Cecilia Pinto has been a teaching artist in the City of Chicago for over twenty years. She was an instructor as well as the former director of the Hands on Stanzas program for The Poetry Center of Chicago. She taught in Northwestern’s Center for Talent Development summer program for gifted students. She was also coordinator for the Chicago Humanities Festival’s Parks@Play program. She is adjunct faculty in the Writer’s Studio at the Graham School for General Studies at the University of Chicago. Her writing has appeared in various publications including Esquire, Fence, Diagram, TriQuarterly and elsewhere. She was voted ‘One of 25 Writers to Watch for 2015’ by the Guild Literary Complex. She received her undergraduate degree from Knox College and an M.F.A. from The School of the Art Institute.

Kenyatta Rogers is a Cave Canem Fellow and has been awarded multiple scholarships from the Breadloaf Writers’ Conference. He has also been nominated multiple times for both Pushcart and Best of the Net prizes. His work has been previously published in or is forthcoming from Jubilat, Vinyl, Bat City Review, The Volta, PANK, MAKE Magazine among others. He is as a co-host of the Sunday Reading Series with Simone Muench, an Associate Editor with RHINO Poetry and currently serves on the Creative Writing Faculty at the Chicago High School for the Arts.

Jeremy T. Wilson is the author of the short story collection Adult Teeth. He is a former winner of the Chicago Tribune’s Nelson Algren Award for short fiction and was recently named one of “30 Writers to Watch” by Chicago’s Guild Literary Complex. His stories have appeared in literary magazines such as The Carolina Quarterly, The Florida Review, Hobart, The Masters Review, Sonora Review, Third Coast and other publications. He holds an MFA from Northwestern University.

Rachel Wilson studied theater at Northwestern and earned her MFA in Writing for Children & Young Adults from Vermont College of Fine Arts. She is the author of Don’t Touch from HarperTeen and The Game of Boys and Monsters from HarperTeen Impulse. Her personal essay, “I Am Not This,” appeared in the YA anthology Life Inside My Mind: 31 Authors Share Their Personal Struggles. She has also penned nonfiction works for younger readers with Rourke Educational Media. Wilson has served as a teaching artist all over Chicago with Barrel of Monkeys, After School Matters, Pegasus Players, The Actors Training Center, CAST, and Dream Big, among others. As a longtime company member with Barrel of Monkeys, Wilson adapts the writing of Chicago students for the stage, performing in schools and in the long-running show, That’s Weird, Grandma. She has appeared in several installments of the Neo-Futurists’ experimental storytelling show, The Arrow. When she’s not teaching at ChiArts, Wilson serves as a Library Associate in Teen Services at Humboldt Park Library. She encourages students to visit her at the YOUmedia center, where they can participate in free programs, use maker lab equipment, hang out with other teens, and play games. Ask her for help with your research or for a good book recommendation!