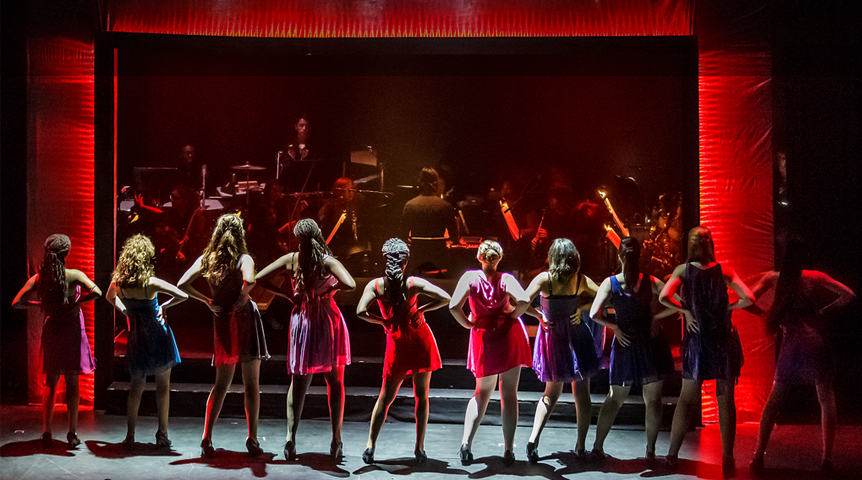 David Blixt is an author and actor. As an Artistic Associate at the Michigan Shakespeare Festival since 2000, he has played such roles as Macbeth, Petruchio, Benedick, Mark Antony, Mercutio, Pistol, Orsino, Oberon, and many more. He received a Wilde Award for Best Actor In A Comedy for his portrayal of Algernon in 2014’s THE IMPORTANCE OF BEING EARNEST. ​ As a Fight Director, he has choreographed all manner of violence, from comedic to horrific. Davis is also an author of historical fiction. His latest novel, WHAT GIRLS ARE GOOD FOR: A NOVEL OF NELLY BLY, was an Amazon bestseller for six months straight. His series of Star-Cross’d novels starting with THE MASTER OF VERONA (set at the birth of Renaissance Italy) is a critical and reader favorite. ​ In life, David describes himself as an “actor, author, father, husband, in reverse order.”

Levizadik Buckins began his dance education at the Educational Center for the Arts in New Haven, Connecticut. He is a graduate of the University of North Carolina School of the Arts, under the direction of Ethan Stiefel. During his time at UNCSA, he worked with choreographers such as Brenda Daniels, Trish Casey, and Diego Schoch. He has also had the chance to work with well-known choreographers Maurya Kerr, Larry Keigwin, Scott Rink, and Trish Lent. He has performed professionally with the Winston-Salem Festival of Ballet under the direction of Gary Taylor in North Carolina, and River North Dance Chicago under the direction of Frank Chaves. While at River North Dance Chicago he worked with Adam Barruch, Kevin Iega Jeff, Ashley Roland, and Ivan Perez. Levizadik is currently in his second year as a dance instructor at the Chicago High School of the Arts.

Christian Helem is a playwright, director and actor from Chicago. He is an alum of the inaugural Theatre Acting class of ChiArts. He went to UIC and earned a BA in Theatre and Performance with concentrations in Playwriting and Acting. He has been seen in “Florissant and Canfield”, “The Piano Lesson”, and the musical “Passing Strange”.

Risha Hill is a 2003 graduate of the MFA Acting program at the California Institute of the Arts. Risha taught in and around Los Angeles for seven years and moved to Chicago in 2014. She currently is a theater teaching artist in several organizations in the city and is now in her second year of teaching at ChiArts.

Taylor Mallory is a professional singer, songwriter, actor, and Level Next Music recording artist. As a music artist, he’s been featured in the Wall Street Journal, JET, Windy City Live! and nominated for Best Male Vocalist for the Chicago Music Awards. His acting highlights include national print, radio, and commercial ads from Corona, Newport, McDonalds, Xfinity and many more. Recently, he made his film debut on NBC’s Chicago P.D. as Darius Brown. Above all, Mallory uses his artistry as an entertainer to uplift and encourage those who have experienced childhood trauma and sexual abuse; his message is simple “You are enough and your healing starts with you.” He is a member of the F.A.M.E. foundation and SAG-AFTRA. His Level Next Music team actively mentors and motivates youth in the inner cities, specifically the South, West, and South suburban areas of Chicago. He closes each class session with the following statement “My passion, will be my profession.”

Kathy Scambiatterra is Artistic Director and co-founder of The Artistic Home. Chicago acting credits include: Beaten, The American Plan, Sweet Bird of Youth, The Skin of Our Teeth, Look Homeward Angel, Juno and the Paycock, Natural Affection, Orpheus Descending (The Artistic Home); The Glass Menagerie, Nelson Algren Live, The Diary of Anne Frank (Steppenwolf); Broadway Bound (Drury Lane Oakbrook); A Flea in her Ear (Chicago Shakespeare); Romeo and Juliet (Goodman Theatre), among others. Regional credits: The Quick Change Room (Pacific Resident Theatre). TV/Film credits: Chicago PD, The Appointment, Draggage, Sin Collector, Into the Wake. She has received 4 leading role Jeff nominations for work in Sweet Bird of Youth, Natural Affection, Abundance, The School for Wives. As a director, she has helmed acclaimed, Jeff nominated and After Dark Award winning productions for The Artistic Home including: Waiting for Lefty, In the Boom Boom Room, Angel City, After the Fall, Street Scene, Peer Gynt, The Madwoman of Chaillot, The Petrified Forest, Modigliani, Days to Come, The Touch of the Poet, The Night of the Iguana. Other directing credits: The Copperhead (City Lit) Angel City, Welcome to the Moon and Other Plays (LA Dramalogue Award), A Christmas Carol (Pacific Resident Theater (LA). Ms. Scambiatterra is the director of the actor training program at The Artistic Home Studio. In addition, she has taught at The Steppenwolf School, Columbia College, Center Theater’s The Training Center, Chicago, IL; Carolyn Berry Studio, The Pacific Resident Theatre LA, CA; Director’s Symposium, US Army, Heidelberg, Germany; Screen Training Ireland, Dublin, Ireland; and currently at The Chicago High School for the Arts.

Nicole Scatchell is a Chicago native.  She holds a Bachelor’s degree in Dance from Columbia College Chicago, as well as her certification to teach Dance K-12 from University of Milwaukee, WI.  As a young dancer Nicole trained at Hubbard Street Dance Chicago, Joffrey Ballet, and Ballet Legere.  Nicole has trained under the direction of Anna Paskevska, Liz Burrit, Jefferson Baum, Eduardo Vilaro, Krenly Guzman, Kathleen Hermsdorf, Darrel Jones to name a few.  She has performed with companies BONEdanse, Zephyr Dance, Get Down/Pick Up Company, David Dorfman, Dropshift Dance and has worked with choreographers such as Peter Carpenter, Reggie Wilson, Jan Bartosek, Tammy Thomas, Sean France, Jeff Hanncock, Jimmy Orrante, Emily Stein, among others.  She performed for audiences in Chicago, Scotland, Italy, France, Germany, New York as well as across the U.S as a soloist with the International Ballet Ensemble.   Nicole has been a dedicated dance educator in CPS, domestically, and internationally for 12+ years.   She is the Artistic Director of Chicago Dance Institute, All City Dance Ensemble Director, and on faculty at Harold Washington College, and Joffrey Academy.  She continues to work with countless non-profits across the U.S. teaching, training, and developing high-level dance programs for specific populations.  She led and directed international programming in Haiti where she worked with local children and trained over 20 local volunteers in pedagogy, in partnership with Worldwide Orphans.  Nicole also choreographs ChiArts’ Musical Theatre main stage productions.  She continues be a guest artist with Chicago choreographers, teach yoga, and perform with her improv comedy group.

Rachel Slavick has been teaching acting for 24 years. Rachel is also faculty at The Theatre School of DePaul University and acts and directs in the Chicago theatre community. She is currently directing the second of The North Shore Trilogy, Pakalolo Sweet, having directed the first (Not One Batu) last summer and will direct all three next summer of 2020.

Jason Sperling works as an actor, singer, teacher, and director around Chicago, and has taught at ChiArts since 2011. He is an emeritus founding company member of Barrel of Monkeys, a children’s writing and theater program, and worked with them for over twenty years. Mr. Sperling created and taught the drama program at St. Juliana School, as well as directing there for seven years; he taught and directed with the CAST program in Oak Park for ten years; he was a poet/educator with the Chicago Park District/Chicago Humanities Festival’s Words@Play program; and he has also taught or music directed for Beverly Arts Center, Raven Theatre, and Prologue Theatre. Additionally, Mr. Sperling has taught, directed, and music directed with Elmhurst Children’s Theatre since 2009, and directed the student-authored sketch comedy show at Chicago Improv Festival’s Summer Theatre Camp in 2009. He has worked as a performer at theatres including Marriott, Drury Lane, Apple Tree, Northlight, Theatre at the Center, Noble Fool, and Ravinia.

Lauren Wells-Mann is an actor, director, dancer, choreographer and arts educator. As a proud company member with MPAACT, she has had the pleasure of directing the following productions: Mother of the Dark Water  (Jeff Nominee for Best Ensemble, Black Excellence Nominee for Best Production and Best Direction), By Association by Shepsu Aakhu (Black Excellence Nominee for Best Production) and various podcast plays.   Assistant Director credits include: Upstate by Aaron Todd Douglass, directed by Carla Stillwell and Crowns by Regina Taylor, directed by Chuck Smith.  Mrs. Wells-Mann holds a Bachelors of Fine Arts in Theater/Acting (Columbia College Chicago) and a Masters in Secondary Education (Univ. of Phoenix). She began her professional acting career with Eta Creative Arts foundation. It was here that Lauren had the pleasure of working with esteemed directors such as Ilesa Duncan, Kemati Porter, Runako Jahi and Cheryl Lynn Bruce. She has also performed with companies such as Lookingglass, Black Ensemble, MPAACT, Harlem Theater Company, Healthworks Theater Company, and Victory Gardens to name a few. Lauren also directed and choreographed for Eta’s summer program, Chicago on the Nile for 3 years, Black Lives Black Words – Chicago and 20% Theater Company, Perceptions Theatre and Griot Theatre Collective. Lauren attributes her directing prowess to the tutelage of Darcelle Williams, Cheryl Frazier and  Carla Stillwell. In addition to these accolades, Mrs. Wells-Mann has been coaching competitive acting and speech events for the Illinois High School Association for 19 years. Under her direction, students have won numerous state and national championships in various acting and public speaking activities. Lauren Wells-Mann believes in the power of the arts and the importance of BIPOC artists having autonomy over their own narratives. It is a mission to which she is deeply committed.